Read what the papers say ………

Richard Westcott sees a trimmed down, fast and furious version of The Marriage Of Figaro by Swansea City Opera at the Queen’s Theatre, Barnstaple. 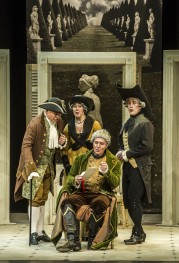 WE knew what we were in for, right from the very first scampering notes of that famous overture – away they went, at breakneck speed: yes, this was going to be a fast-moving, light-footed and light-hearted Figaro. Which is indeed one entirely appropriate approach, and one that works, especially if the company is small.

Time and again, the farcical elements of this complex, not to say convoluted opera were nicely presented, with impressively neat acting bowling us merrily along through the subterfuges from one conspiratorial confusion to another.

But, beloved and enjoyed as it so rightly is, this is a difficult opera, becoming ever stranger with the passing of the years. Just below the farce, where Brian Rix meets Oscar Wilde, lies profundity as deep as in any Shakespeare tragedy: there are heartrending demonstrations of rejection, disillusionment and personal annihilation, not to mention shameless exploitation, lies, abuse and personal cruelty. Miraculously, Mozart’s music manages to encompass all this.

Although there were some wonderful poignant moments, such as the Countess’s lovely Act II aria, beautifully sung by Elin Pritchard, this seemed to be a Figaro played mainly for the laughs.

To that end, the central roles of Figaro and Susanna, performed excellently by Aris Nadirian and Helen Massey, were crucial. And they were supported delightfully by the other seven cast members.

This may have been a light production, in the sense that scenery was reduced to individual, often suspended, items of furniture, minimal lightweight wooden obelisks and simple wardrobe doors. But these worked well, especially when accompanied by those splendid 18th century opulent – at times fantastically over-the-top – costumes, which counteracted any impression of an economy version.

From the strictly musical point of view, there were some challenges. Despite the small size of the band, some voices were overpowered, orchestral balance was a problem (over prominent woodwind, especially the bassoon, accomplished as this playing was) and ensemble work when singers were widely separated on the stage was not always easy to integrate. But one recognises the difficulties inherent in our particular theatre, the fact that the company was here for only one performance and that this was the first date on the tour.

But what a pleasure to meet Figaro again in all his vitality, played with such verve! Our thanks go to Swansea City Opera for a lovely evening, for making us first on their list, and we send them our best wishes for the highly successful national tour they so obviously deserve.